For more than 100 years, armored transport has been protecting those most vulnerable to attack. We’ve had armored military vehicles for servicemen since the turn of the twentieth century. And transporting valuables in armored cash in transit vehicles started after World War I, when crime was high and the world’s wealth needed extra protection. Today armored vehicles are more critical than ever, in service all over the world – from armored police and military vehicles, to SWAT tactical vehicles, to cash in transit vehicles, to armored sedans and armored SUV’s.

Obviously, when armies, police units, SWAT teams, banks, retailers, ambassadors, and high-profile politicians, entrepreneurs and celebrities are looking for armored vehicles, they’re looking for the safest, highest quality available. That’s why organizations and individuals from all over the world choose The Armored Group – providing the highest level of armored transport protection on the market today.

Police officers and military personnel could never protect us as well as they do if they weren’t protected themselves by armored police and military vehicles. SWAT teams also engage themselves in especially dangerous situations – high-risk warrants, hostage rescues and armed interventions, terrorism prevention, counter-terrorism and dealing with heavily-armed criminals. The Armored Group delivers the protection they need with armored vehicles specially equipped to defend against attackers – bulletproof and strong enough to withstand other forms of aggressive assault. Their armored car options include rapid deployment vehicles, buses, command centers, prisoner transport vehicles, troop carriers and more.

Cash-in-transit robberies are a problem all over the world. Security guards carrying the cash are often hurt or killed. And the stolen cash is typically used to fund organized crime. That’s why so many banks and shops choose The Armored Group to provide them with their cash-in-transit vehicles – vans and trucks specially equipped to resist attempts at robbery or hijacking.

Ambassadors, politicians, entrepreneurs and celebrities can be big targets for many reasons, targeted by large underground organizations or individuals. So whether they’re visiting other countries in high-risk areas or simply going back and forth between work and home, ambassadors, politicians, entrepreneurs and celebrities often need armored transport. Armored Sedans and SUV’s are the answer, with bulletproof glass and layers of armor inserted underneath the outer skin of the car. So they’re inconspicuously protected in an armored vehicle that looks just like any other on the road.

The Armored Group’s selection of armored sedans and armored SUV’s includes names you know, like the Chrysler-Dodge 300M, BMW 750LI, Ford Excursion and GM Escalade. Plus, Ford, GM or Chrysler make all the police and military vehicles, SWAT tactical vehicles and cash trucks. Or they’ll even customize the vehicle of your choice.

So whether you need a fleet of armored Ford vans for your cash in transit company, or an Ashton Martin DB9 for special appearances, this U.S.-based armored car company ensures you the highest level of armored protection in vehicles manufactured by companies you trust.

Contributed by The Armored Group
www.armoredcars.com


The Armored Group hopes the preceding article has been interesting. We have included this article on our website to inform you about the transportation and safety industries. In the future, we'll continue to include articles that will keep you informed. Does your purchase used armored trucks or vans? Do you want the best in bulletproof technology in the armored vehicle industry? Are you in a high-profile position or planning a visit to a high-risk area? We invite you to explore the wide range of used armored cars, vans and trucks on our website. As you'll see, we provide the highest level of protection in used armored cars and vans, SWAT trucks, rapid deployment, and tactical vehicles on the market today. Thanks for visiting, and be sure to come back regularly. 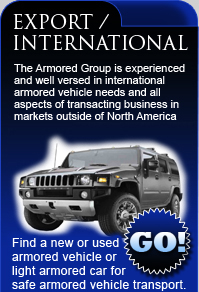 8 Manufacturing Sites In 5 Countries In Business Since 1992